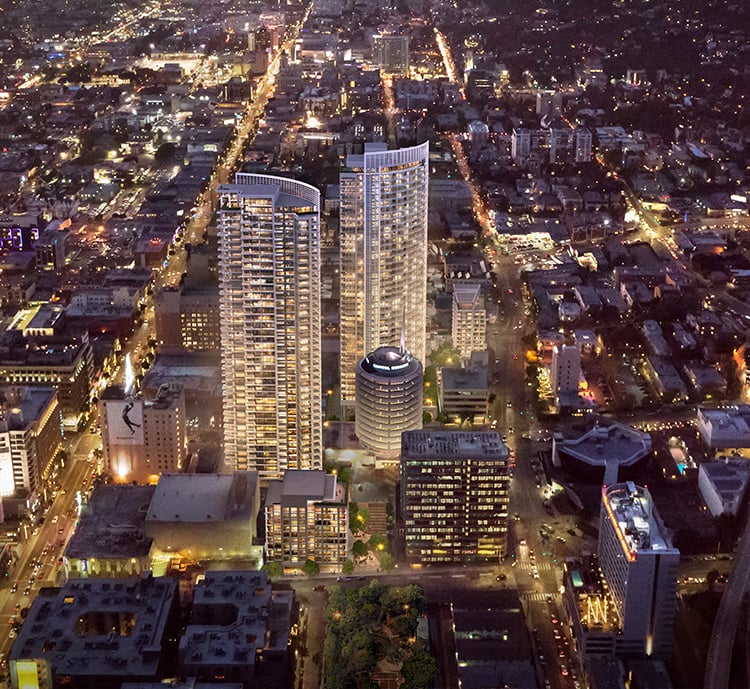 Hollywood Center will be a 4.5-acre, LEED Gold Certified, mixed-use vertical community at Hollywood and Vine. Rising from surface parking lots adjacent to the Capitol Records Building, this project has been designed by Handel Architects to complement the unique architecture of the iconic building and realize the plan of the site’s original architect, Louis Naidorf.

Created by MP Los Angeles to respond to LA’s critical need for housing, Hollywood Center comprises two buildings of 35 stories and 46 stories, two mid-rise buildings of 11 stories each, with a total of 1005 residential units. Of these, 133 will be set aside for very-low and extremely-low income seniors, which will be managed by Menorah Housing Foundation, a Los Angeles-based nonprofit and one of the largest operators of senior affordable housing in Southern California. This affordable housing component marks one of the largest complements of on-site affordable housing within a market-rate development in the history of the City.

In addition to the residences, two dynamic, new civic plazas will add an acre of open green space to the project and create a much-needed, safe outdoor gathering place in the heart of Hollywood, unlike any that exists in the city today. This inviting, pedestrian-friendly setting will be a central hub for the neighborhood, offering a wide array of outdoor amenities including numerous restaurants and cafes, as well as space for concerts, art shows, wellness activities, and more.

Hollywood Center will be a forward thinking, environmentally-conscious, and sustainable building, as well as a safe and resilient space, utilizing state-of-the-art technology and building techniques. Public and pedestrian safety will be paramount. In addition to being located adjacent to the Metro Red Line, the project has been designed with amenities that encourage biking, walking, and mass transit as primary transportation options.

Developer MP Los Angeles is committed to creating a project that responds to the needs of the community. Backed by executives responsible for large-scale, transformational projects in major cities throughout the U.S, MP Los Angeles has worked closely with the Hollywood community and elected officials to create a project that addresses Los Angeles’ current and future needs and concerns, from affordable housing and environmental stewardship to neighborhood revitalization and historic preservation.

For community inquiries and to stay informed, please fill out our form.

What are examples of environmental impacts studied in the Hollywood Center Draft EIR (DEIR)?


The DEIR for Hollywood Center studied the potential impacts within the following areas: air quality, greenhouse gas emissions, shade-shadow, glare, cultural resources, traffic, parking, land use, and noise, among others. Hollywood Center is required to mitigate significant impacts, if any, in these areas if possible and feasible.

What is the Environmental Impact Report process?

What were the conclusions of the Hollywood Center DEIR?

Of particular note, the DEIR found that impacts in the key study area of Greenhouse Gas Emissions impacts would have a less than significant impact as a result of key project design features. As a certified Environmental Leadership Development Project (ELDP), Hollywood Center has committed to building a project that is carbon net-neutral both during construction and through operation.

Cultural Resources
As part of the prescribed mitigation, the nearby historic buildings can be protected with the use of vibration monitors. The Hollywood Center team fully intends to work with our neighbors to implement this prescribed mitigation measure to protect these historic resources and to reduce the impacts to less than significant.

Noise / Vibration
As with other infill construction projects, the DEIR found significant impacts related to temporary noise and vibration during construction based on highly conservative assumptions. The DEIR includes a robust set of mitigation measures to minimize temporary noise and vibration impacts, which the Hollywood Center team plans to implement, in addition to working closely with our neighbors during construction to reduce these impacts to less than significant.

What additional subterranean investigations have been completed to study potential earthquake faults?

What impact will the project have on traffic?


The DEIR found less than significant impacts associated with the transportation study area. This DEIR is one of the first analyses prepared by the City of Los Angeles to use the Vehicle Miles Traveled (VMT) methodology to study transportation and traffic impacts. Previously, projects were measured by the metric “Level of Service,” or LOS, a measure of traffic congestion at signalized intersections surrounding a project site. VMT is intended to study and evaluate transportation impacts more regionally and holistically.

Hollywood Center has a robust commitment to addressing transportation concerns in the area. Located within a particularly dense area of Hollywood that is served by multiple public transit lines, the project has agreed to achieve 15% greater transportation efficiency than comparable projects. This includes providing 50% transit subsidies for residents and employees, ridesharing options, on-site car share, a bicycle hub with parking, repair, and showers, and a tech-enabled transportation information center.

What are the next steps in the public approvals process?


The release of the DEIR starts a 45-day public comment period which closes on June 1, 2020. Following that, the City will prepare written responses to comments received as part of the Final EIR (FEIR). After the FEIR is completed and released for public review, there will be public hearings before the City Planning Commission, the City Council’s Planning and Land Use Management Committee, and the full City Council.

When will construction of Hollywood Center begin?


Hollywood Center has not yet been approved. The DEIR estimates that, pending approval, construction will begin in 2022.

How long will construction take?

Where are you in the entitlement process?

Will there be a development agreement?


Yes – the project will include a development agreement with the City of Los Angeles to provide a mechanism for community benefits.

Will there be any offsite signage as part of the project?


No – although the property is located within the Hollywood Sign District, the project includes zero offsite signage.

Will the project be LEED-certified?


The project will be LEED-Gold certified. The project will also be Greenhouse Gas net-neutral, meaning that throughout construction and operations of the project, the site will emit no more GHGs than it does today.

Will there be pickup and drop-off areas for ride sharing services?


Planning for the future of transit is important, not just for the project, but for the greater Hollywood neighborhood. Our project will have dedicated pickup and drop-off areas for ride share to improve safety and minimize circling traffic.

What is the economic impact of the project?

What are the heights of the buildings?


Each of the senior affordable residential buildings is 11 stories. The heights of the mixed-use buildings are 35 and 46 stories.

Why are senior affordable units appropriate for this project/location?


Given the housing and the affordable housing crises in the region, we are committed to including onsite affordable housing in our project. We have partnered with Los Angeles-based nonprofit Menorah Housing Foundation to oversee and manage the day-to-day operations of Hollywood Center’s designated affordable units. The project site, centrally located in the heart of Hollywood and adjacent to mass transit is a perfect location for senior housing, allowing longtime Hollywood residents the opportunity to age-in-place in Hollywood in residential buildings with appropriate amenities built specifically to serve their needs.

Do you have any above grade parking?


This project includes no above grade parking.

What bicycle amenities will be included in the project?


The project will include abundant permanent and temporary bicycle parking spaces, both below grade and at-grade. It will also include a bicycle center with bicycle maintenance services available to the public.

Is any aspect of the project open to the public?


Yes – the project features publicly accessible open space designed by Field Operations, the landscape architect of the world-renowned High Line Park in New York and the Tongva Park in Santa Monica. The project team will ensure that the public gets to enjoy beautifully landscaped gardens, a technology enabled music plaza experience, and community driven acoustic music performances, in a safe and secure environment.

Will the Capitol Records building be preserved?

How much retail is planned and who are the likely retail tenants?


The project will include 30,176 square-feet of commercial space. The likely tenants include coffee shops and eateries as well as neighborhood serving retail.

What has the architecture team designed before in Los Angeles?


Handel Architects has designed buildings across Los Angeles, and recently was selected by the City to design the Angel’s Landing site in Downtown Los Angeles. For a complete list of Handel projects, please visit their website at www.handelarchitects.com